In memory of my USAF Veteran Dad, and for all of the Veterans and active military who courageously put their lives on the line to protect our freedoms and serve our citizenship in times of peace, disaster, and need: Thank you! 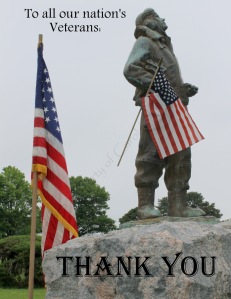 Note about the photo:
This was taken in a cemetery nearby. It is a statue that marks the grave of this family’s only son (only child!) who was killed in WWII – and it is his likeness. What a beautiful (and sad) tribute.

And, since it’s getting to be that time of year,  please remember service members when filling out your Christmas Card list:
Holiday Mail for Heroes Campaign (Christmas Letters)
www.redcross.org/holidaymail
Each year the American Red Cross provides assistance to more than 2 million service members and many of our nation’s 24 million veterans. We support military families, military and veterans hospitals and provide emergency communications across the globe. And once a year, we get the joy of delivering holiday cards to veterans, military families and active-duty service members at hospitals and installations around the world. The cards and personal messages, sent by tens of thousands of Americans, provide a welcome “touch of home” for our troops during the holiday season.

Thanks for stopping by – have a great day

Fire up the grill!

Get the sparklers ready!

Special Thanks (always!!) to all who serve, and have served, in the Armed Forces!

Have a safe and healthy day of celebration! …and FUN! (that goes without saying, really!)

Thanks for stopping by – have a GREAT Holiday!

On this day in 1776, the Declaration of Independence was approved by the Continental Congress, setting the 13 colonies on the road to freedom as a sovereign nation. Philadelphians marked the first anniversary of American independence with a spontaneous celebration, however observing Independence Day only became commonplace after the War of 1812. Congress passed a law making Independence Day a federal holiday on June 28, 1870.

Special Thanks, always, to all who serve in the Armed Forces!

Have a safe and healthy day of celebration! …and FUN! (goes without saying, really!)

In celebration, and as a teaser in our photowalk-the-states journey: 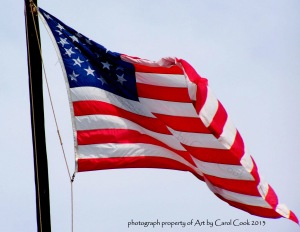 This photograph is of a US Flag from 1847 that flies at Ft. Clinch.

Having shared this I’ll let you know that there is at least one other step before we get to Ft. Clinch…

And be ready for a little bit of US history!

Starting with:
Even though the Continental Congress adopted the new US Flag on June 14, 1777 AND President Woodrow Wilson issued a proclamation calling for a nationwide observance of Flag Day on June 14, 1916, Flag Day did not become official until August 1949, when President Harry Truman signed the legislation and proclaimed June 14 as Flag Day. In 1966, Congress also requested that the President issue annually a proclamation designating the week in which June 14 occurs as National Flag Week.

I’ll be dropping a few more knowledge bombs with the next few photowalk posts, too! (Cool!)

What fun would it be to just shoot photographs without learning a bit about the area where they’re taken? (answer: There’s no fun in that! And we know I’m all about FUN!!!)

Have a great weekend ~ see ya tomorrow!